It’s true that there are Federal tax incentives imposed by the government to increase investments by prominent corporations. But not paying a single dollar at all sounds fishy. Donald Trump thinks however that he is smart – being able to do that. 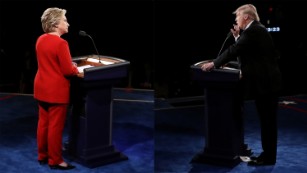 Clinton pressed Trump on the issue, saying “There is something he is hiding.” I’m ‘smart’ for paying no taxes; Trump breaks into her 2-minute turn. Trump replied that he would release his taxes when Clinton made public 33,000 emails that were deleted from her private email server. When Clinton said that Trump had paid no federal income tax in some years, Trump replied “That makes me smart.”

If Trump thinks that evading to pay tax is being smart, then he should not run for president. He will find it hard to collect taxes. Worst, he just don’t know what to prioritize with the money collected.

How does it feel when your President to be is not paying taxes at all?

This is a good question to Americans especially the white Americans. A rich presidential candidate who never contributes to public services enhancements  will find it hard to understand why better healthcare and infrastructure for the public is important.

Clinton admits that he prepared well for the debate. This includes having someone pose as Trump as they practiced. She also sounds so real when she said that she also prepared to be president.